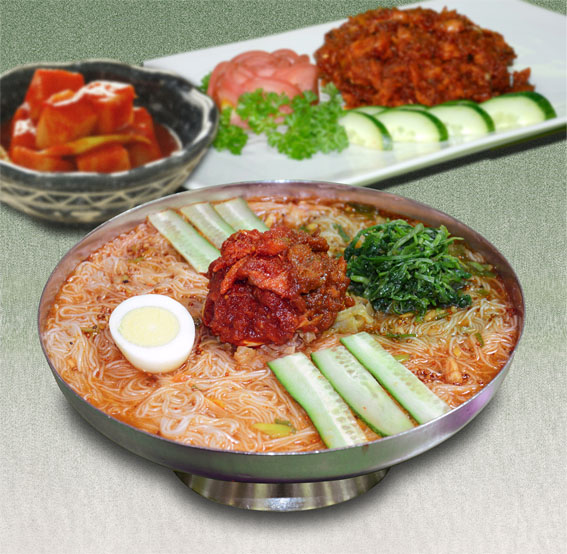 Hamhung starch noodle is one of favorite national foods of the Korean people.

According to historical data, starch noodles were originally made in the period between the late 1700s and early 1800s after potatoes were first introduced in Korea.

At first, Koreans mainly ate boiled potatoes. Then, they began to study how to make potato foods more appetizing and diverse. In the course, they ground potatoes to make starch and kneaded it with hot water to prepare starch noodles. It was called Hamhung starch noodle, as it was made for the first time in Hamhung of the then Hamgyong Province, the main potato producer of the country in those days. Since then, it has become a specialty of the area.

The locals in Hamgyong Province were fond of making pungent foods. They prepared starch noodles with slices of raw fish by making use of fish resources abundant in the area, and served them together with unique spices and mustard sauces.

The restaurants for specialities of South Hamgyong Province in Pyongyang and other provinces serve Hamhung starch noodles and strive to preserve its original recipe through lectures for passing-on techniques by experts.

Kim Myong Ok, head cook of Sinhung Restaurant serving specialities of South Hamgyong Province in Pyongyang, said: “Being tough, hot, and refreshing are the characteristics of the noodle. Its coils are tough and glossy and crunchy. As it is served quite hot and is very pungent, people will often sweat heavily while eating. But its taste is so thrilling and fascinating that they do not lay down their chopsticks. So, it is coming into great favor among the locals not only in Hamgyong Province but other regions.”

Many families are fond of cooking starch noodle and the parents pass the recipes to their children.

The Korean national food sector is making efforts to develop the starch noodles into a world-famous food.

Hamhung starch noodle has been inscribed on the list of the national intangible cultural heritage.