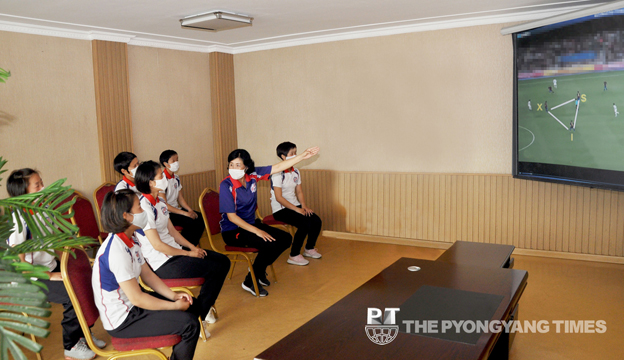 “More than half of our players are just fresh from the youth team,” said Jo Song Ok, head coach of the senior women’s football team of the Pyongyang Sports Club.

The team was recognized as one of the strongest at home until recently as it would regularly finish in the top three at the national premier league.

But the ageing of the team cast gloom over its future and the fear of its failure materialized as it fell to the fourth place at the 2018-2019 national women’s premier league.

The club replaced the team’s head coach with Jo who had rich international experience.

She was the captain and a centre-forward of the DPRK eleven when they won international games in succession taking the spotlight of the world and was a coach in charge of centre-forwards and midfielders when the DPRK women triumphed at the EAFF E-1 Football Championship 2017.

She wants to hand down her past glory to her team.

“The outcome of games can be said to depend on the special skills of the team’s players. In my view, it is most important to select players with special techniques and make each of them give full play to their fortes in accordance with the team’s tactical plan,” she said.

She always finds herself among the players to observe their merits and demerits and to work out appropriate training schedules and methods.

She applies herself to finding out players who excel in the speed of prediction, reaction and action, shooting, scoring and playmaking.

In the latter half of this year, her team has mainly focused on studying tactics.

“Whenever the ploys we elaborated with so much effort work, everyone jumps for joy, and in the course of this they grow in confidence and redouble their efforts to achieve a higher goal,” said the head coach.

The entire team is toiling with a sense of mission to exalt the honour of their country and add lustre to the name of their team.