Woman With Lots of Children 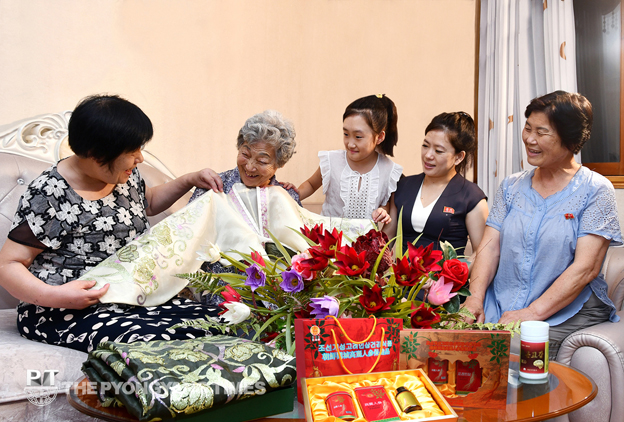 Old people feel happy when they receive filial affection from their children in the twilight of their life.

Caring adult children are always concerned about their parents’ living, including food, clothing and health. So Jae Ryol, an 80-year-old resident of Sojang-dong, Pothonggang District, Pyongyang, has more than 130 such children.

She greeted her 80th birthday on April 27. That day a stream of children flowed to her house to spend a happy and meaningful time with her.

“Eldest daughter” O Yong Sun living in Phalgol-dong No. 2 in Mangyongdae District invited the mother to her home to present her new clothes and show her a congratulatory performance staged by grandchildren in the run-up to her birthday.

The old woman who is warmly looked after has, in fact, no child by blood.

She dedicated her whole life to the prosperity of the country while taking care of her husband who was an honoured disabled soldier.

“Her life is the course of constant devotion. After finishing middle school, she became a military nurse and donated her blood and skin to treat patients. She unhesitatingly abandoned her plan to study at university of medical sciences she had been so eager to attend and got married to an honoured disabled soldier after her demob, although she knew too well that her husband Ri Jae Nam could neither live long nor father a child. Thanks to her devotion, he could prolong his life for over four decades,” said O Yong Sun.

Since 1973 she has received dozens of certificates of assistance and such titles as “honorary stonemason at the mason workshop in the construction site of the Samjiyon revolutionary battle site” and “honorary smelter of UHP electric arc furnace at the Chollima Steel Complex”.

“My husband and I were born in the period when the country was under Japanese military rule and enjoyed the benefit of liberation. And we keenly realized how precious the country is during the Fatherland Liberation War. As we believed that we were as good as dead if we had no country and socialist system, we promised to work for its prosperity at the time of marriage. I only tried to keep the promise,” said So Jae Ryol.

Her greatest joy was to see the workers and builders, who were provided with the aid materials she prepared, make labour innovations and the scrap iron she collected every day be sent to iron and steel works to contribute to developing the country.

So was a passionate lover of life in her youth and her husband had an aptitude for literature. They co-produced lots of literary works singing of the stirring times and toured industrial establishments and construction sites. They converted a room of their house into a “literature classroom” and became “after-school teachers” for children and students in the village.

She also planted trees of good species and beautiful flowers around important places and monumental structures, including the Kumsusan Palace of the Sun where President Kim Il Sung and Chairman Kim Jong Il are preserved in their lifetime appearance and their statues on Mansu Hill.

She is following her usual course of life though it is not easy to do so for her advancing years.

As her deeds move all the people, lots of them have become her children and grandchildren to copy her.

When she was living in Mangyongdae District, her children vied with each other to have her with their families, and Pak Ok Hui finally succeeded in having her in Sojang-dong in Pothonggang District.

“When I first met her, I admired her ennobling view of life and her sincere devotion. I want to fulfil my obligation as a junior to the seniors who dedicated their all to the prosperity of the country like our mother,” said Pak.