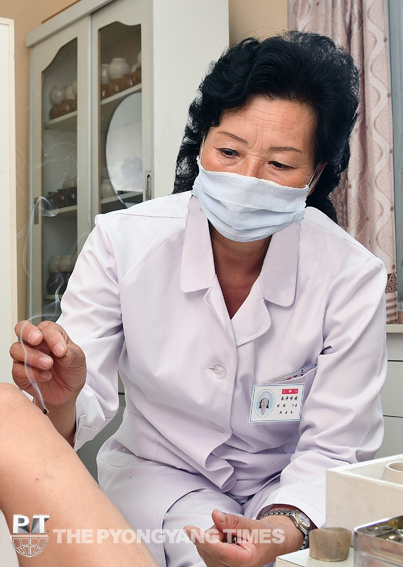 The people’s hospital of Jangwol-ri, a mountain village in Junghwa County of North Hwanghae Province, is well known for good healthcare in the country.

A Korean-style building with a hip-saddle roof, the hospital is furnished with surgery, internal treatment, pediatrics, obstetrics and gynecology and Koryo medicine departments, a laboratory, a dispensary, injection and delivery rooms, sick rooms and a sauna for medical treatment. It also produces over a dozen kinds of Koryo medicines with materials it has grown in its own herb garden.

According to her, doctors are in charge of households in certain areas and take good care of the residents to prevent diseases from developing or cure illnesses at the early stage. So they are always busy with sick calls.

Now, Jangwol-ri is known as a place free from infectious diseases and with zero infant mortality for over 30 years.

“Director Choe, a central meritorious person of socialist patriotism and Merited Doctor, is well-known for her high medical skills, attracting many patients from across the country,” said doctor Pak Yong Sun.

Ri Chun Sil, a woman living in Koksan County, said that her son Yong Myong had suffered from severe speech and memory impediments and motor disturbance caused by cerebral palsy till he was 12 years old. “But three months after he received medical treatment from Director Choe, he began to speak and write like a normal child. It seems to me like a dream,” she noted.

She said she wanted to bow low to the director and other health workers of the hospital who take responsible care of the patients to the last with devotion.

After visiting the hospital, foreigners admired it, saying it was surprising to see such a wonderful hospital in a mountain village and they have never seen a hospital equipped with such fine primary healthcare facilities in the world before.