To Achieve Final Victory in the Anti-Japanese War 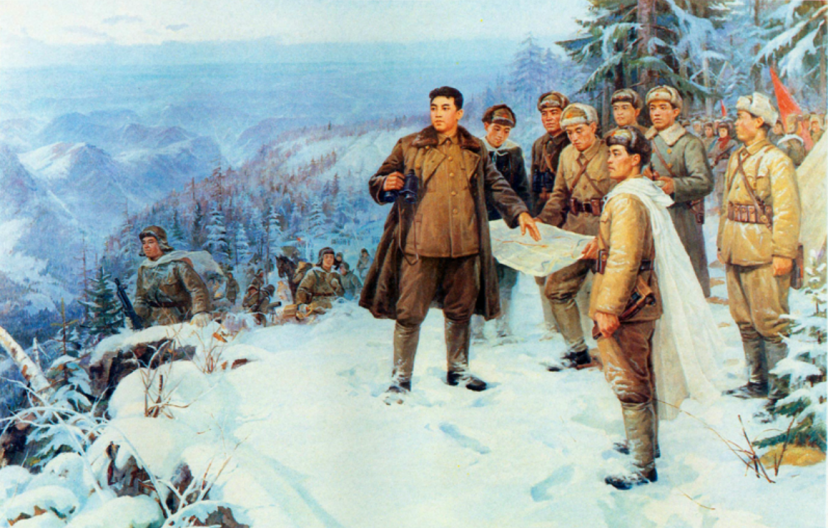 Entering the mid-1940s, the situation changed both in Korea and abroad. The ruling system of the Japanese imperialists who militarily occupied Korea became gradually paralyzed, whereas the anti-Japanese, anti-war struggle of the Korean people gained momentum in different parts of the country as the days went by.

With deep insight into the requirements of the prevailing situation and the developing revolution, Commander Kim Il Sung wisely organized and led the struggle to achieve the final victory in national liberation. At a meeting of military and political cadres of the Korean People’s Revolutionary Army early in January Juche 32 (1943), he clarified the final operational directions for the anti-Japanese war–a general offensive of the KPRA, an all-people uprising combined with it, and joint operations of KPRA small units and armed resistance organizations behind enemy lines–depending on the situation, and confirmed it as the three-point line for national liberation.

On May 10, Juche 34 (1945), he called a meeting of military and political cadres of the KPRA, in which he, based on the three-point line for national liberation, specified the general objective of the final offensive for national liberation, its main form, formation of forces and other action plans, and put forward the slogan, “All efforts for the final victory of the anti-Japanese war!”

After the meeting he advanced into the Kanbaeksan Secret Camp, Yonsa, Puryong, Rajin and other areas, where he took measures to mobilize the small units and groups of the KPRA, all-people resistance organizations and other revolutionary organizations active in the homeland for the showdown with the Japanese imperialists. On July 30, 1945, he made public the operational plan for the final offensive at a meeting of the military and political cadres of the KPRA.

Kim Il Sung recollected as follows in his reminiscences With the Century:

“We had planned to move the units of the KPRA that had assembled in the area of Mt Kanbaek by prearranged routes to different provinces to liberate them, and airlift the units that remained at the training base in the Soviet Far East region to Pyongyang and other areas to occupy the secret bases that had been built and launch military operations in full swing. In addition, the small units and political workers of the KPRA active in the homeland were to expand resistance organizations on a large scale and rouse the people to national resistance so that all the people would fight in response to the offensive of the KPRA all over the country.”

The plan was the most correct way for defeating the Japanese imperialists at an early date and achieving national liberation by the Korean people themselves.

True to his order, the KPRA units, together with the all-people resistance forces, annihilated the Japanese imperialist aggressor forces and their military ruling machinery in different parts of Korea.

On August 15, 1945, they achieved the historic cause of national liberation.