Amid the intensified anti-epidemic campaign for thoroughly checking the inroads of the world’s threatening pandemic, an emergency event happened in Kaesong City where a runaway who went to the south three years ago, a person who is suspected to have been infected with the vicious virus returned on July 19 after illegally crossing the demarcation line.

The anti-epidemic organization said that as an uncertain result was made from several medical check-ups of the secretion of that person’s upper respiratory organ and blood, the person was put under strict quarantine as a primary step and all the persons in Kaesong City who contacted that person and those who have been to the city in the last five days are being thoroughly investigated, given medical examination and put under quarantine. 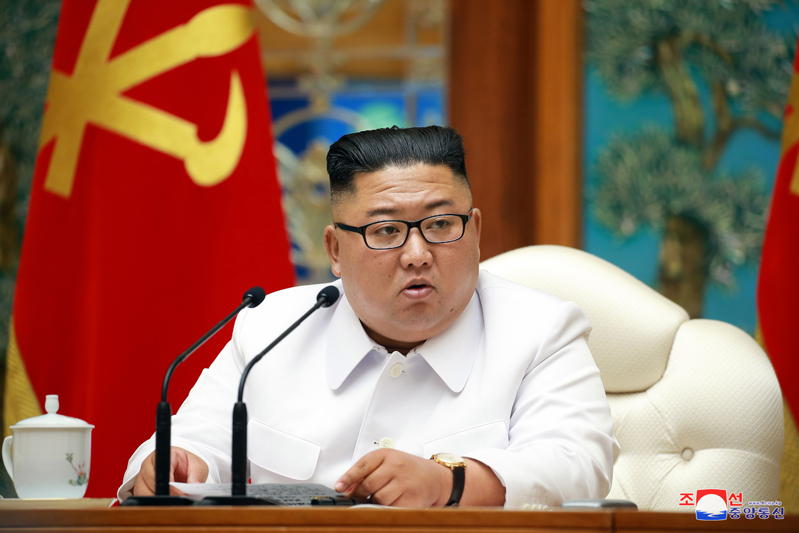 Kim Jong Un, chairman of the WPK, chairman of the State Affairs Commission of the Democratic People’s Republic of Korea and supreme commander of the armed forces of the DPRK, was present at the meeting.

Attending the meeting also were members and alternate members of the Political Bureau of the C.C., WPK.

Present there as observers were members of the Central Emergency Anti-epidemic Headquarters.

Upon authorization of the Political Bureau of the C.C., WPK, Supreme Leader Kim Jong Un presided over the meeting.

Despite the intense preventive anti-epidemic measures taken in all fields throughout the country and tight closure of all the channels for the last six months, there happened a critical situation in which the vicious virus could be said to have entered the country, the Supreme Leader said, adding that he took the preemptive measure of totally blocking Kaesong City and isolating each district and region from the other within July 24 afternoon just after receiving the report on it.

To tackle the present situation, he declared a state of emergency in the relevant area and clarified the determination of the Party Central Committee to shift from the state emergency anti-epidemic system to the maximum emergency system and issue a top-class alert.

He specified tasks for each sector to be immediately implemented by Party and working people’s organizations, power organs, public security and state security institutions, anti-epidemic and public health institutions.

The meeting unanimously adopted a decision of the Political Bureau of the Central Committee of the WPK on shifting from the state emergency anti-epidemic system to the maximum emergency system.

He instructed all the participants to immediately conduct follow-up organizational work to carry out the decision of the Political Bureau of the Party Central Committee in their fields and units, and party organizations at all levels and every field to ensure and guarantee the most correct implementation of the directions and assignments of the Party Central Committee with a sense of boundless responsibility, loyalty and devotion.

He underscored the need to thoroughly maintain tough organizational discipline and ensure the unity in action and thinking throughout the Party and society, to keep order by which everyone absolutely obeys and moves as one under the baton of the Emergency Anti-epidemic Headquarters and the need for party organizations at all levels to perfectly perform their role and duty.

Saying that everyone needs to face up to the reality of emergency, he appealed to all to overcome the present epidemic crisis by not losing the focus of thinking and action, practicing responsibility and devotion to be faithful and true to the leadership of the Party Central Committee, being rallied closer behind it so as to defend the welfare of the people and security of the country without fail.

The meeting sternly took up the issue of the loose guard performance in the frontline area in the relevant area where the runaway to the south occurred, and decided that the Central Military Commission of the WPK would get a report on the results of an intensive investigation of the military unit responsible for the runway case, administer a severe punishment and take necessary measures.