There is a youth workteam at the Phyongphungdok Goat Farm in Hamju County of South Hamgyong Province.

White clouds floating around the mountainside, thousands of hectares of meadow, more than 40 kilometre-long road along pastures and herds of goats grazing here and there–this is the appearance of the Phyongphungdok Goat Farm.

Originally, Phyongphungdok was a place of strong wind where people hesitated to live willingly. There, young people began to open the road for pasturing with their ambition and ideal.

Here is part of diary written by a girl of the farm.

“January 20, Juche 96 (2007)
It is the height of the winter cold today.
When we went outside, the blizzards were raging as if to swallow the whole land and the mountains were covered with snow.
But we found ourselves on pastures today as usual.
Because even in winter the goats must be put to grass every day for breeding.”

Though everything was insufficient, the young people made the land fertile, sowed seeds to create a pasture and bred domestic animals.

They walked a long road at night to get grass seeds suited to the characteristics of the area and good for goat-grazing and sat through many nights to keep a goat alive.

In hot summer and in wild snowy winter, they continued to go up and down steep mountains, carrying the A-frames of manure on their backs to expand the area of grassland and sow and cultivate grass seeds the goats like.

Besides, they learned assiduously and all became able grass carers, pasturers and vets who breed the goats in a scientific and technological way.

Now the remote mountain village, where the howls of wild animals were heard in the past, has been completely changed. 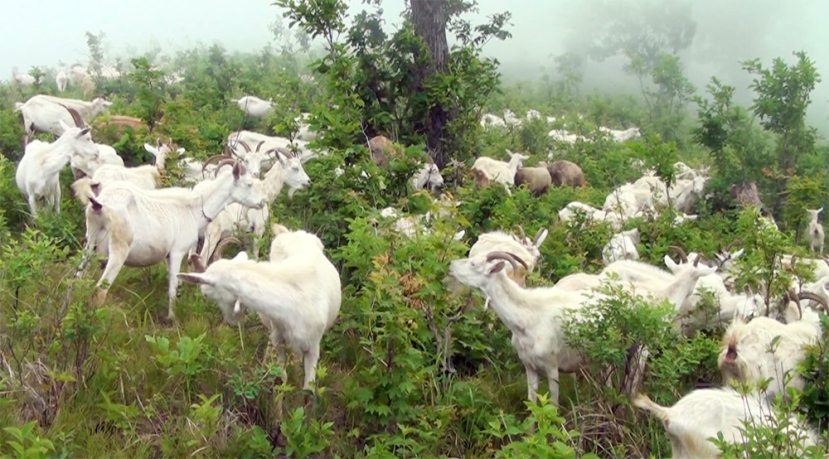 Herds of goats are seen roaming the boundless expanse of pastures and modern dwelling houses and cultural and public service facilities have been built along the sunny mountain foots.

Also enjoyable are the wide roads to pastures along the passes and the goat-cotes and milk-processing houses built everywhere on the vast meadow.

This stockbreeding base is producing a lot of goat milk and meat to be supplied to the nurseries, kindergartens and dwellers in the county.

Young people of Phyongphungdok are pasturing animals with a resolve to build it up into a good place to live and work in.