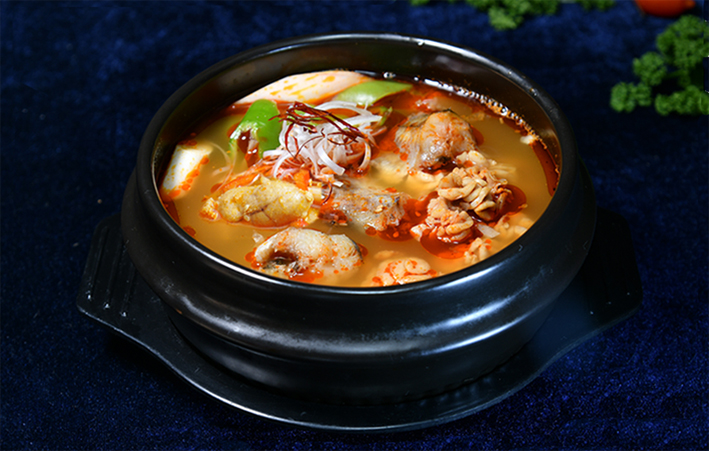 The area of Hamgyong Province in Korea covers the present-day North and South Hamgyong and Ryangang provinces, and some parts of Kangwon Province.

As it is comprised of vast plains along the east coast, northern mountainous regions and fishing grounds in the East Sea of Korea, it has been well known for a wide variety of local delicacies.

Main materials of local dishes include field crops such as soybean, corn, sorghum, and potato, edible herbs including anise, bracken, osmunda and Codonopsis lanceolate, and aquatic products such as Pollack, flatfish, lockington, hairy crab and octopus.

Such dishes are characterized by its spicy and fresh tastes like the lively and open-hearted personalities of the local residents.

Potato starch noodles have tough and slippery strips and are garnished with slices of boiled meat or seasoned raw fish.

Tangogi soup has its traditional recipe indigenous to the Hamgyong provincial area. The first stock of boiled meat is drained off, and fresh water is added to boil the meat again. The soup is also served with plenty of hot spices.

Yongchae kimchi is one of local delicacies served to welcome the guests.

Fermented spicy flatfish is made by putting in a pot salted cuts of flatfish dressed with boiled foxtail millet, garlic, powdered chili and malt and other ingredients, supplementing radish slices after 2-3 days and fermenting them.

Nowadays local dishes of the Hamgyong provincial area are widely known across the country.