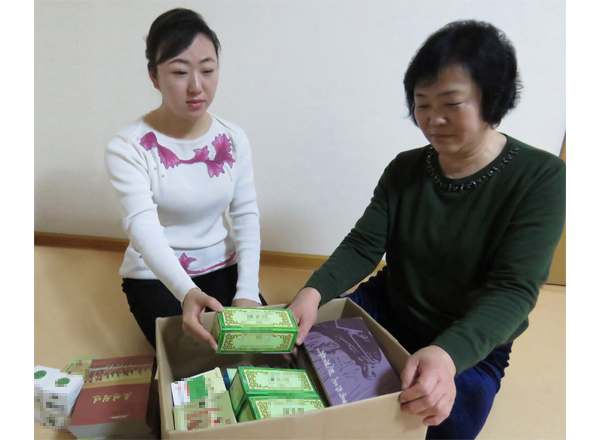 As the saying goes, long absent soon forgotten. And people often say that far from the eye, far from the heart. But invariable is the devotion of a girl in the capital Pyongyang to an honoured disabled girl soldier in Kyongsong County of North Hamgyong Province in the far-off northern tip of the country.

The Pyongyang girl is Paek Un Hwa working at the Pothonggang Branch of Pyongyang City of the Central Bank and the ex-service girl is Pak Sol Ok who is one year younger than the former.

One summer day eight years ago, Paek Un Hwa was passing by the Pyongyang Railway Station and a woman asked her the way to the Kim Man Yu Hospital. After showing the way kindly, she looked in the direction the woman was going and saw a girl sitting on a wheelchair.

Accompanying them to the hospital, she came to know that the girl was an honoured disabled soldier.

“Frankly speaking, I used to visit families of honoured disabled soldiers in my university days and after getting a job and they were aged people. I respected them for they had done a lot of things for the country.

But when I saw Sol Ok similar to my age, I felt something unusual. Thinking that she would have had a great ambition, I wanted to help her and do something to make her stand on her feet.”

Paek Un Hwa frequently visited the ex-service girl, asked her how she was treated and what she needed in the hospital and kindly told her to take her as an elder sister.

Listening to her kind words and eating the sweets she brought for her, the ex-service girl treated her as her real sister.

She came to Pyongyang every year for five years for medical treatment and the Pyongyang girl devoted unselfish sincerity to her.

Thanks to the sincerity shown by doctors of the Kim Man Yu Hospital and the Pyongyang girl, the patient got much better and came to receive medical treatment in the county hospital.

The Pyongyang girl often made phone calls to Kyongsong.

One day she met a schoolmate and was greatly impressed by him. The schoolmate has been visiting the house of a war veteran together with his parents for over 15 years since his middle school days.

Paek Un Hwa said to herself: “How can I think I did my best for Sol Ok as she got much better and does not come to Pyongyang for treatment? If she was my sister, I would not have done so.”

She would prepare tonics and novels together with her mother and send them by parcel post to Sol Ok.

Each time, Sol Ok felt the affection of a real sister nearby.

Though far-off, the minds of the two girls were always close to each other.

“I have got intimate with Sol Ok. She seems to be my sister. I have an elder sister and now a younger sister far away in Kyongsong. I think my sister Sol Ok will be standing up for sure. I hope she would realize her dream.

But I feel my sincerity for her is still insufficient.”

The Pyongyang girl promised her sister in Kyongsong to have a photo taken together after standing on her feet.