With His Eye On Olympic Gold 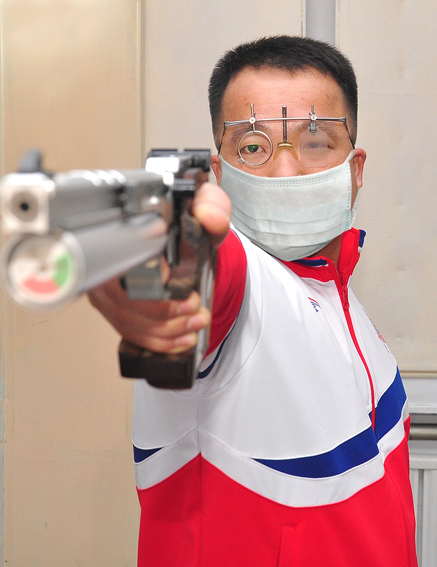 “I was 14 years old when I first came to the Amnokgang Defence Sports Club with my father. Strangely enough, the sound of gunfire at the shooting training ground I heard that day was alluring,” said Kim Song Guk.

The DPRK shooters bagged 11 medals including six golds at the 14th Asian Shooting Championships held in Qatar in November last year. At the event Kim, a shooter at the Amnokgang Defence Sports Club, won the men’s 10m air pistol and set a new Asian and world record.

“Something unusual about him is that he can maintain stable mindset in any circumstances and has a good concentration,” said his coach Ju Hak Chol.

Kim was selected as one of the top ten players of the year 2019 of the DPRK.

He had already won a bronze medal in the 31st Olympic Games in 2016, drawing the attention of experts.

He is never weary or conceited, which is often seen among the top-notch players, his colleagues say.

According to Kim Yong Gwang, a shooter who has trained with him for years, he has remained as honest and open-minded in his training as he did when he was a newcomer.

Living in Moranbong District, Pyongyang, he loves his wife and six-year-old daughter very much and enjoys lyric songs in his leisure time.

His father is a discharged officer who was well known as a marksman in his unit and he became a shooter as his father asked him to do, said Kim.

He is now training hard to achieve the goal of winning a gold at the 32nd Olympics.