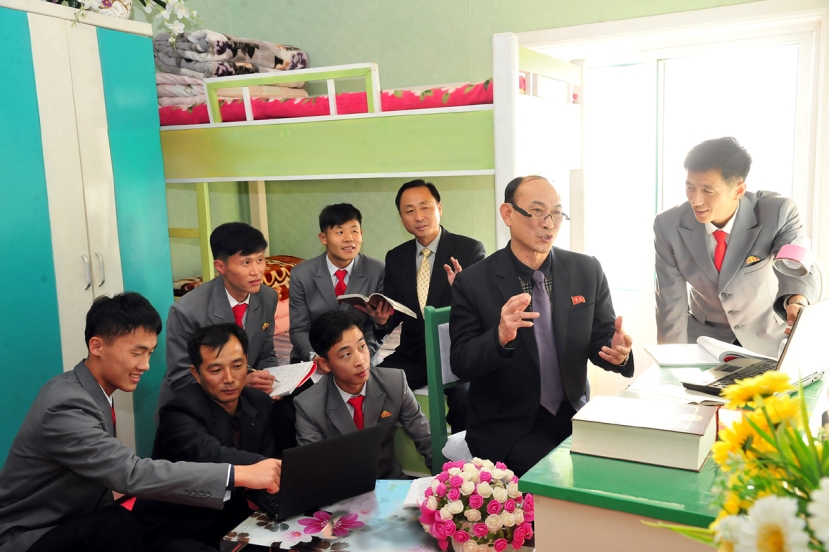 Korea tells many impressive stories about genuine educators who are devoting their sincerity to the students with motherly character, including a maiden teacher who piggybacked a little pupil with hurt leg to school and teachers who volunteered to work at schools in secluded mountain and islet villages.

The following is a story about educators at the Law Faculty of Kim Il Sung University.

Among the freshmen at the Law Faculty in Juche 105 (2016) was a demobilized student who had been unexpectedly wounded during his military service. He was Kim Kuk Il from Jasong County of Jagang Province.

Teacher Pak Jun Hyok says: “Kim Kuk Il came to walk again miraculously thanks to the warm sincerity of leading officials, medical workers and neighbours in his county. But when he entered our university, he had not been completely restored to health. After all, he started his university life with the worry if he could study hard in the future.”

It was a unanimous will of teachers of the faculty to do their best to help him restore his health as early as possible and give himself to his studies.

His health as well as his studies became a matter of concern of the faculty.

The teachers inquired after him every day, tried to provide him with tonics good for his health and led him to study with confidence. When he left for a sanatorium during the vacation, they not only made all preparations for him with parental feelings but also called on him in person.

When he was in hospital, all the teachers of the faculty visited him along with special foods they had prepared at home together with their families to learn about his treatment and pay deep attention to his appetite. In his teachers and classmates calling on him almost every day, Kim Kuk Il saw his kind mother and sister in the far-off hometown.

After he left the hospital, teachers of the faculty called at the dormitory almost every day to guide studies he was absent from during his hospitalization. Thanks to their parental affection, Kim Kuk Il could recover his health and study hard like other students.

The campus with teachers who are strict but overcautious and generous like the parents in the hometown represents the socialist system of Korea which is harmonious with virtues and affection.