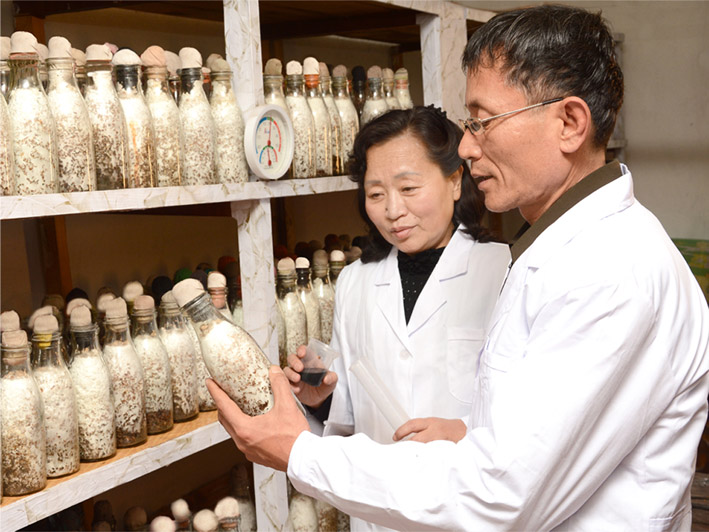 In November Juche 85 (1996), a video programme “Mushroom Girl” was televised.

It was a story about Choe San Bok, a mushroom cultivator at the Moranbong District Vegetables and Fruits Wholesale Store in Pyongyang, who has dedicated herself to the research and cultivation of mushrooms for over ten years. She made painstaking efforts to develop a method of Pleurotus eryngii growing by making use of activated sludge and increased its yield by 1.5 to 2 times. She produced large amount of mushrooms every year and sent them to the honoured disabled soldiers, war veterans, nurseries and kindergartens in the district. The story caused a great sensation.

The State highly appreciated her for her contribution to improving the people’s living standards by developing mushrooms that give high yields and are easy enough to be cultivated by anyone. Her new method of mushroom cultivation became generalized throughout the country. Her working place turned into a “training centre”, which drew many people from across the country.

While keeping her cultivation and research of mushrooms, she chose every Wednesday as the day of technical workshop and ran it on a regular basis. She visited mushroom cultivation grounds over 80 times and gave technical workshops and demonstrations. She has since disseminated her new method to over 50 thousand people from all walks of life and introduced it into more than 2,000 units, including industrial establishments and cooperative farms in different parts of the country. As a result, the number of model mushroom cultivation units and families has increased.

In recent years, she developed a technique of Pleurotus ostreatus cultivation based on zymotechnics that make use of waste substrates of Pleurotus eryngii and a technique of Auricularia polytricha cultivation by means of short fermentation on ondol (underfloor heating system) and high-temperature treatment and thus made it possible to increase the output of mushrooms.

She also developed a method of producing pig feed by making use of mushroom waste substrates and wrote several books, including “Mushroom cultivation and technique of using waste substrates”.

“I will render services to turning ours into a mushroom country,” she said.

The “mushroom girl” is still devoting herself to the research and cultivation of mushrooms.

She is the secretary-general of the Pyongyang Municipal Mushroom Association.

Depending on the people with small-dollar grassroots support ensures that PSA is exclusively accountable to working class anti-war progressives.