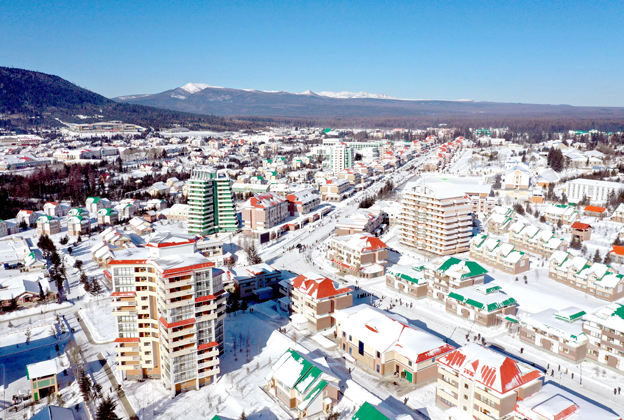 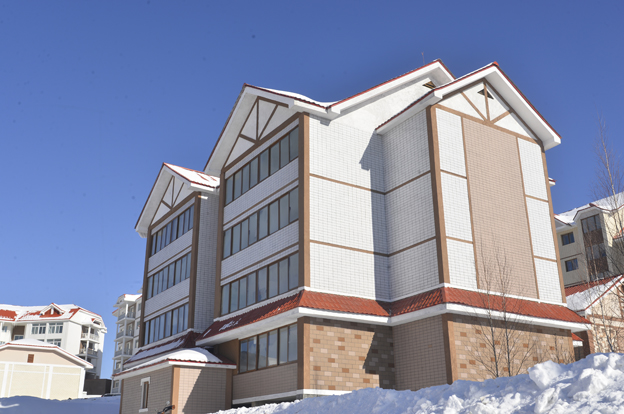 In good harmony with forests

A spectacular fairyland city has sprung up in the northernmost tip of the country where Mt Paektu, the sacred mountain of the Korean revolution, stands.

The sections are clearly divided by choosing the colours of coating and sheet-metal roofing materials of the buildings to suit their purposes and features and the buildings have been designed and arranged flawlessly in artistic and diversified forms and styles on the basis of national traditions.

The Paektusan Museum stands imposingly in an area of well over 10,000 square metres as befits a centre for educating the people to deeply understand the undying exploits of President Kim Il Sung and Chairman Kim Jong Il and giving them comprehensive knowledge about the history of the development of the Mt Paektu area by the nation, the evolution of life in it and others, adding weight to the size and importance of the central axis of the city.

Public buildings and houses have been designed distinctively in various forms and shapes to give three-dimensional effect. Wide roads stretch straight, fully demonstrating the modern architectural beauty of the streets and their shapes and colours blend in so well with the primeval forests in the environs of the city that they add to the flavour of a mountainous city.

Multi-storey apartment houses and public service amenities are linked well to ensure artistic connectivity and compatibility between buildings and all buildings, several- and many-storeyed ones, create harmony in line with the architectural requirements while ensuring practicability. Therefore, each architectural group reminds viewers of a great artwork.

In addition, new standards have been created even in road facilities, visual aids and illuminations, and parks and green spaces distributed properly to go well with the alpine areas of Mt Paektu, making Samjiyon a new model of local urban construction.

The whole nation provided active and sincere support to the development of the city with Mt Paektu, in which the Korean revolution began and Chairman Kim Jong Il was born, into a wonderful mountainous city of culture.

In the face of a multitude of severe difficulties and ordeals caused by the ill-intentioned moves of hostile forces, the units in charge of the production of building materials and equipment radically increased production to dynamically push the construction project.

The workers of the Sangwon Cement Complex raised the rate of operation of equipment with a firm determination and continued production even when the kiln stopped running due to an unexpected situation by working in the hot furnace in a do-or-die spirit.

The Pyongyang General Electric Cable Factory 326, the Taedonggang Electrical Appliances Factory, the Anju Pump Factory, the Pyongyang Building-materials Factory and other related units gave top priority to the supply of materials and finishing building materials needed for the project. Railway workers more than doubled their freight transportation plan on a daily average.

Working people, students and schoolchildren across the country took an active part in the nationwide manpower and material support to the city construction project, following the example set by the triplet girls of Pyongyang who volunteered to live and work in the city.

Family and twin-sister shock brigade members were seen everywhere at the construction site and university students volunteered to work for the project one after another during their summer and winter vacations.

Lots of women also volunteered to work in the construction site from across the country, giving aid materials and looking after the builders.

Volunteers also included a woman living in Sadong District of Pyongyang who recovered from an incurable disease under the socialist system and pensioners who encouraged the builders.

Supreme Leader Kim Jong Un highly praised many people for their sincere material and moral support to the construction of Samjiyon City.

Making the most of local economy and culture

Local factories and cultural centres in Samjiyon City also make the most of its peculiarities.

Factories relying on raw materials available in the northern alpine area have been built wonderfully.

With production buildings, welfare facilities, a storehouse and others, the factory produces blueberry wine, juice and jelly, local specialties, from blueberries harvested from the pollution-free, natural forests.

All processes are automated and germ- and dust-free at a high level from fruit selection to packaging.

Built in an area of some 27,920 square metres, the Samjiyon Potato Farina Factory has buildings for the production of potato farina and processed potato products, a 20,000-ton capacity potato storehouse, auxiliary building and workers’ hostel.

Advanced technologies have been introduced to establish an energy-saving integrated manufacturing system in the factory so that it can reap maximum profits by monitoring, measuring and controlling all production processes and management equipment automatically and analysing and estimating production command and management activities scientifically and comprehensively.

The city also has the Pegaebong Ski Slope, a hospital, hall of culture, schoolchildren’s palace, indoor stadium and sci-tech library.