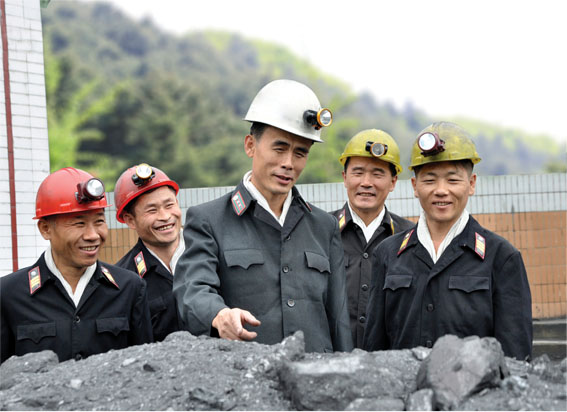 The February 8 Jiktong Youth Coal Mine under the Sunchon Area Coal-mining Complex has a large share in the country’s coal production. Han Sung Chan, a pit manager, has worked here for about three decades.

After his discharge from military service, he was assigned to the mine as a tunneling worker. At that time the coal-mine village produced a Labour Hero. He was Kim Yu Bong who had fulfilled his daily norm by 200 percent for over 10 years after he was discharged from the army and thus contributed to making his workteam produce large amounts of coal equivalent to 27 years’ assignments.

Han determined to live as Kim.

Heroism is not displayed in a moment. Affection for and attachment to one’s workplace lead to performing feats. Regarding it as the motto of his life, he devoted his all to the production of coal.

One day after he was appointed as the pit manager, he fell into deep thoughts about bad roadbed while touring the coal face. Much labour was required to repair the roadbed in case a mine car was derailed.

According to his proposal, his workteam began to renovate the roadbed while keeping up tunneling. Over 70 days later, they renovated thousands-of-meter-long roadbed, thus making a breakthrough in boosting production.

When a coal-cutting company was newly organized, its members became bent on urgent production but paid no attention to labour-consuming horizontal digging.

Saying that they must do at any cost what others cannot do in order to increase coal production, he organized the work to raise the rate of horizontal digging, with result that the output per dug meter increased remarkably. Understanding that science and technology are the key to boost production, he was the first in the mine to introduce efficient equipment into the coal faces.

Several years ago, a sump burst out in a coal face. When everyone hesitated at the unexpected accident, he shouldered a prop and jumped into the muddy coal before all others.

His heroic and sacrificing struggle inspired other miners. They made vigorous efforts to restore the coal face, setting up props and frames of logs in the waist-deep water. As a result, they resumed production in a matter of 16 hours. That year, over 18,000 tons of coal was produced in that face.

Over the past decades, he has made efforts to make his workteam a harmonious, united unit whose members help and lead each other forward and undertake all hard jobs while fulfilling their national economic plan every year.

Today, his pit stands in the vanguard of the coal-mining industry, displaying the honour of producing more than 200,000 tons of coal a year.

He is one of the paragons of the times.