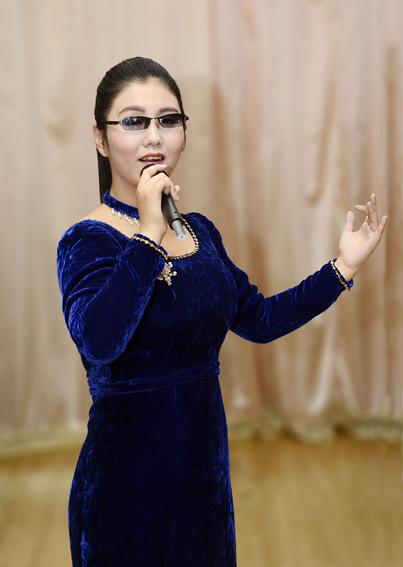 Pak Jin Ri, 17-year-old singer, sang several encores at a homecoming performance of the art troupe of persons with disabilities which was given in Pyongyang last October after its China tour.

As the performance showed, she is a popular singer who wins great admiration of the audience in all performances at home and abroad.

People may think that it is unreasonable to call a woman, who has just grown out of girlhood, a popular singer, but Pak is undoubtedly an accomplished singer.

She sings so emotionally making listeners hearts warm, her songs are inspiring, vigorous and impassioned—this is the unanimous opinion of the audience about Jin Ri and her songs.

“My daughter sang when she began to speak. She startled others by singing songs from the start to the end with the vocalism of grown-up singers when she was two and a half years old. When she was five, she sang songs of international contest winners so well that neighbours said her songs were as wonderful as those broadcast on TV,” said her mother Ri Kyong Hui.

Asked how she could become so good at singing, she would answer, “Song is just my life.”

Even in her childhood when her coevals spent days with play, she used to listen to songs from TV and recorder and repeatedly hear every song ten or twenty times till she was conversant with them, her family members said.

Sometimes, she heard and sang songs in her room all day long, and she was so passionate that even her family members did not dare to disturb her.

Since her childhood, she has collected thousands of songs including classic, modern, popular, folk, and world-famous songs.

“It is true that I loved song very much, but the positive encouragement of well-wishers was the source of my energy, I think. Even at present I can’t forget villagers and nursery and kindergarten teachers, who would embrace me as a reward for my good singing, as well as teachers of the primary school I attended, the Pyongyang Students and Children’s Palace and Taedong school for the blind who spared no efforts to nurture my artistic talent,” said Jin Ri.

Her artistic ability is further being enhanced through artistic group activities.

She dreams of becoming a famous singer who sings well any songs including popular, folk and opera songs.

Therefore, she values every song she keeps while studying and taking in the characteristics and good qualities of every song and singer.

“Jin Ri has inherent temperament and passion as a singer. Even experts are surprised to hear her unique and individual timbre, rich voice and deep breath. She is a promising singer,” said Ri Jong Hwa, a staffer of the art association.