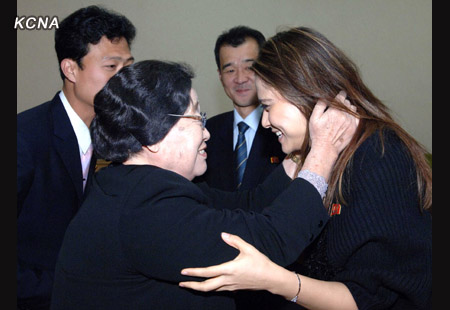 Rodong Sinmun, the official newspaper of the Central Committee of the Workers’ Party of Korea, dated March 1 Juche 102 (2013), carried a news that Supreme Leader Kim Jong Un sent a gift to Jindallae Saphariny, president of the Jindallae Children’s Fund of Palestine. Even though it was just a few paragraphs, it created a great sensation in the world community.

Thirty-four years ago, the representative of Palestine to the DPRK was Mustafa Al Saphariny. He and his wife Jasmine, even after ten years of marriage, had no child. Thanks to the concern and care of Chairman Kim Jong Il, Jasmine gave birth to a pretty baby girl after receiving medical treatment at the Pyongyang Maternity Hospital. With great delight, they wrote a letter of gratitude to the Chairman. According to the customs of their country, Palestinians would ask the most respected man of scholarly attainments to name their children. So, the couple asked the Chairman to name their daughter.

Receiving their letter, Kim Jong Il was greatly rejoiced over the fortune of the couple. He named their daughter Jindallae and sent her a precious present as a token of wishing her good health and happy future. On the occasion of her first birthday in 1986, he sent another present to her.

Her parents were deeply impressed by his loving care that made them a happy father and mother and his affection of presenting a valuable gift to their daughter.

Before leaving Pyongyang in May 1992, Mustafa, together with his daughter, paid a farewell visit to President Kim Il Sung. Holding Jindallae on his knees, the President asked Mustafa to bring her up well.

Later on, Kim Jong Il sent her many gifts on her every birthday.

Upon receiving the sad news of his unexpected demise in December 2011, Jindallae visited the Beijing-based DPRK embassy to lay a wreath in tears. She wrote in the mourner’s book that Kim Jong Il, her dearest father, would be alive forever in her heart, expressing the most profound condolences over his death.

On the day of establishing the Jindallae Children’s Fund in November 2012, she donated the first fund raised by her family and herself to laying out more splendidly the Kumsusan Palace of the Sun where the great leaders Kim Il Sung and Kim Jong Il lie in state, and to the Pyongyang Maternity Hospital and other units.

In February 2013 before her wedding, she wrote to Supreme Leader Kim Jong Un.

In the letter she wrote her emotion of telling good news that she has performed the vow she had made before Kim Jong Il who gave her life and named her, as well as her gratitude to the Supreme Leader who inspired and supported her in establishing the fund. And she cordially asked him to give blessings to her wedding.

Reading her letter in great delight, the Supreme Leader blessed her marriage and the future of her new family and sent his greetings to her, wishing her to do even better things to improve the friendship between the DPRK and Palestine. He also saw to it that her wedding dress and other precious gifts were sent to her and a delegation was dispatched to congratulate her on her wedding.

Cherishing in her mind the affection of the great leaders of the Korean people, Jindallae Saphariny is devoting her all to developing the friendly relations between the two countries.