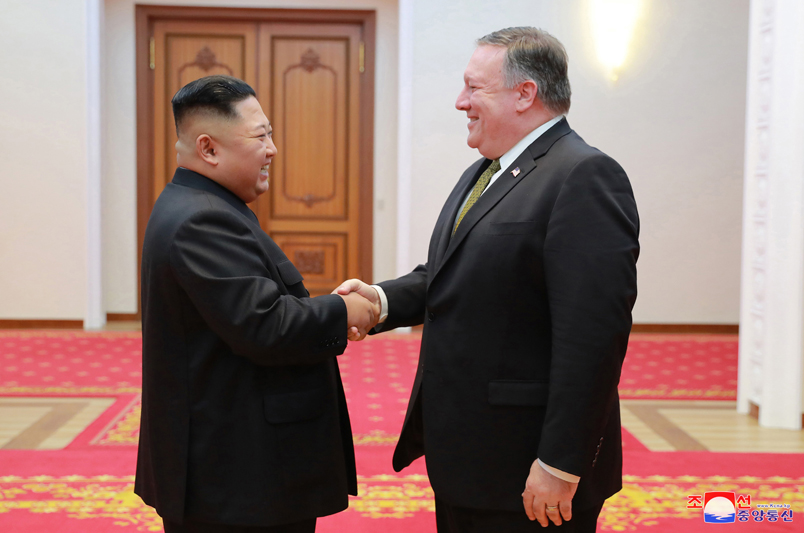 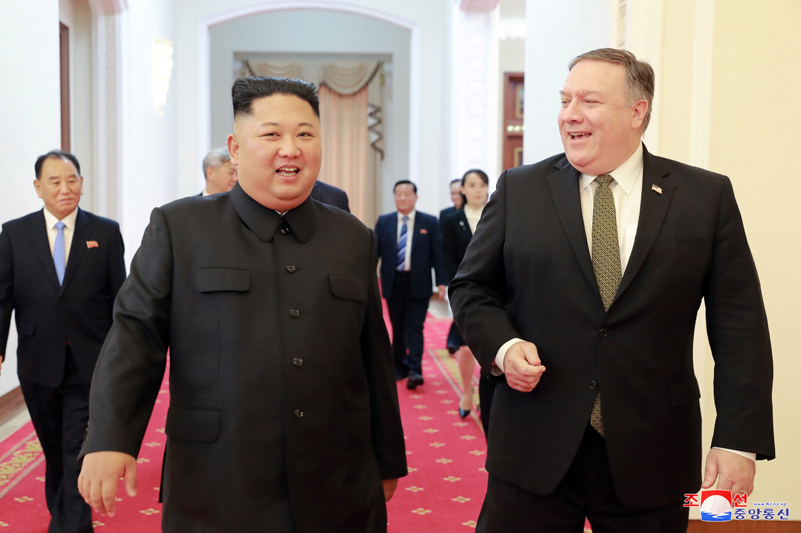 Kim Jong Un, chairman of the Workers’ Party of Korea and chairman of the State Affairs Commission of the Democratic People’s Republic of Korea, Sunday received Mike Pompeo, secretary of State of the United States of America on a visit to the DPRK.

Kim Jong Un, Supreme Leader of our party, state and army, warmly greeted Mike Pompeo and gladly exchanged greetings and had a photo taken with him at the Paekhwawon State Guesthouse.

He warmly welcomed the U.S. secretary of State’s visit to the DPRK and spoke highly of him, recalling how he worked energetically for the historic DPRK-U.S. summit and the development of relations between the two countries while visiting Pyongyang several times.

Then he had a talk with the secretary of State.

Kim Jong Un estimated that progress is being made in implementing the June 12 joint statement agreed upon at the first DPRK-U.S. summit talks. He expressed his gratitude to President Trump for making sincere effort to this end, asking Mike Pompeo to convey his regards to Trump.

Together with Mike Pompeo, Kim Jong Un appreciated the positively developing situation on the Korean peninsula, explained in detail the proposals for solving the denuclearization issue and matters of concern of both sides and exchanged constructive opinions.

There was an exchange of stands of the top leaderships of the two countries on the issues arising in holding the second DPRK-U.S. summit talks to be followed by an in-depth discussion of them.

The Supreme Leader expressed his will and conviction that a great progress would surely be made in solving the issues of utmost concern of the world and in attaining the goal set forth at the last talks with the projected second DPRK-U.S. summit talks as an occasion.

There was an agreement on the issue of holding the working negotiation for the second DPRK-U.S. summit talks as early as possible, and relevant procedure-related issues and ways were also discussed.

Kim Jong Un expressed satisfaction over the productive and wonderful talks with Mike Pompeo at which mutual stands were fully understood and opinions exchanged.

He hosted a luncheon at the Paekhwawon State Guesthouse where the U.S. delegation stays.

Exchanged at the luncheon were views on issues of great interest such as further activating the communication and contact and visit between the two sides for the success of the DPRK-U.S. summit and the development of the DPRK-U.S. relations.

Expressing the belief that the dialogue and negotiations between the DPRK and the U.S. based on the deep confidence between the top leaders of the two countries would continue to develop favorably in the future, too, and a good program for the 2nd DPRK-U.S. summit talks would be provided sooner or later, the Supreme Leader said good-bye to the U.S. secretary of State.